The International Academy of Architecture is launching MEETARCH – new series of events aiming at introducing famous artists in the field of architecture.
Between 2nd and 4th of July 2019 MEETARCH is proud to present to the Bulgarian public the creative work of the world famous video-artists, filmmakers, producers and publishers Ila Bêka and Louise Lemoine.
The event will be held in partnership with the French Institute in Bulgaria. The venue of the event will be Slaveikov Hall (3 Slaveikov Square, 1000 Sofia, Bulgaria).
Official language of the event will be English. 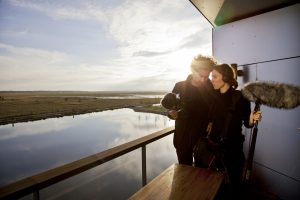 Video-artists, producers and publishers, Ila Bêka and Louise Lemoine have been working together for the past 10 years mainly focusing their research on experimenting new narrative and cinematographic forms in relation to contemporary architecture and urban environment. Focusing their interest mainly on how the built environment shapes and influences our daily life, they have developed a very unique and personal approach which can be defined, in reference to French writer Georges Perec, as an anthropology of the ordinary. Presented by The New-York Times as the “cult figures in European architecture”, Beka & Lemoine’s work has been widely acclaimed as “a new form of criticism” (Mark) which “has deeply changed the way of looking at architecture” (Domus).

Selected as one of the 100 most talented personalities of 2017 by Icon Design, presented by the Metropolitan Museum of Art (New York) as one of the “most exciting and critical design project of the year 2016”, the complete work of Bêka & Lemoine has been acquired in 2016 by the Museum of Modern Art in New York (MoMA) for its permanent collection.

Their films have been widely presented in major biennials and international cultural events such as The Venice Architecture Biennale (2008, 2010, 2014), The Oslo Architecture Triennale 2016, the Seoul Biennial of Architecture and Urbanism 2017, Performa 17 in New-York, among many others. Their films are also frequently exhibited in some of the most prestigious museums and international cultural institutions, such as the Metropolitan Museum of Art in New-York, the Louisiana Museum of Modern Art in Copenhagen, the Victoria & Albert Museum in London, the CAPC museum of contemporary art in Bordeaux, the Museum of Modern and Contemporary Art (MMCA) in Seoul, or the Canadian Center for Architecture in Montréal, Canada. 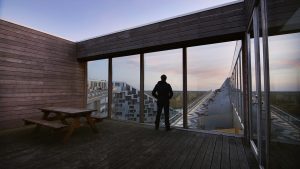 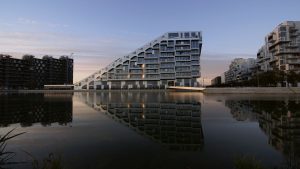 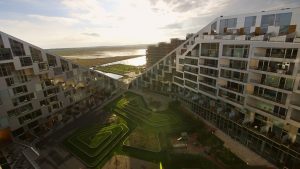 The Infinite Happiness is a highly unusual architectural experience. The film takes us to the heart of one of the contemporary residential developments considered to be a new model of success: the giant “8 House” designed in 2009 by Danish architects BIG-Bjarke Ingels Group in the suburbs of Copenhagen. Ila Bêka & Louise Lemoine recount their month-long immersion inside this experiment of vertical village, nominated “World best residential building” in 2011.

As a Lego game, the film builds up a collection of life stories all interconnected by their personal relation to the building. Drawing the lines of a human map, the film reveals the building through an inner and intimate point of view. By showing the surprising results of this innovative social model, the directors question the architecture’s ability to create collective
happiness. 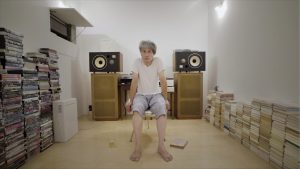 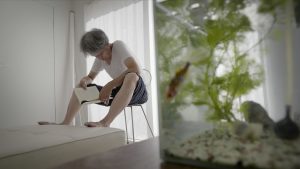 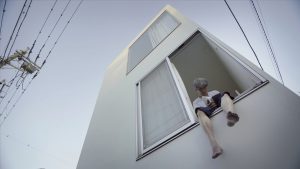 One week in the extraordinary-ordinary life of Mr. Moriyama, a Japanese art, architecture and music enlightened amateur who lives in one of the most famous contemporary Japanese architecture, the Moriyama house, built in Tokyo in 2005 by Pritzker Prize winner Ryue Nishizawa (SANAA).

Introduced in the intimacy of this experimental microcosm which redefines completely the common sense of domestic life, Ila Bêka recounts in a very spontaneous and personal way the unique personality of the owner: a urban hermit living in a small archipelago of peace and contemplation in the heart of Tokyo. From noise music to experimental movies, the film let us enter into the ramification of the Mr. Moriyama’s free spirit. Moriyama-San, the first film about noise music, acrobatic reading, silent movies, fireworks and Japanese architecture! 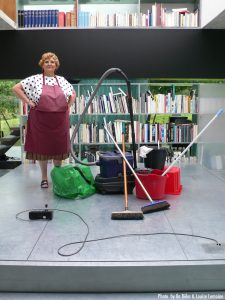 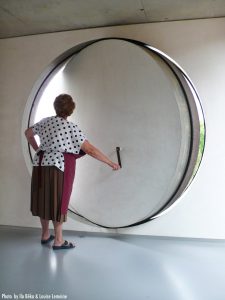 Koolhaas Houselife portrays one of the masterpieces of contemporary architecture: the house in Bordeaux, designed by Rem Koolhaas / OMA in 1998. The film lets the viewer enter into the daily intimacy of the house through the stories and daily chores of Guadalupe Acedo, the housekeeper, and the other people who look after the building. As we follow and interact with Guadalupe, an unusual and unpredictable look at the spaces and structure of the building opens up.